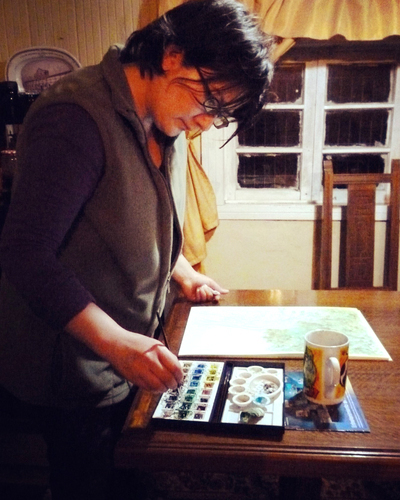 My paintings are highly influenced by the vision of interpreting with the elements of the cinema the cut of the planes, as well as communicating sensations through color, having a deeper symbolism in the meaning of all the elements gathered in the composition of the painting.

Suspension and fantasy represent a physical interruption between one shot and another, also cutting off the viewer’s flow of attention, as does film montage, which can provide the viewer with more scope of knowledge. There is a decomposition of space that seeks to reconstruct the image with interlaced planes.

The juxtaposition in the images creates floating, suspended spaces and dimensions, whose forms come together to form a single reality, with independent elements that form a whole.

Color as an emotion in which the figurative and the abstract coexist, the imaginary texture, in a fantasy of permanent reconstruction. Two-dimensionality and geometric elements are the engine of movement.

The narration of my paintings are through sensations in the images, a state of mind, a dream, a feeling, a spatial state, a transfer to the future, a reality turned into unreality.

Represents the crossing of the speed barrier, a horse that advances forward and melts into another dimension, pierces and loses part of its shape and inserts itself beyond the poles of light in the middle of the darkness. A pillar of white antlers, like an octopus, crosses it, unable to stop it, balances it.

The horse represents a nobler vision of speed, without technological intervention, but behind it hides a false mechanical appearance, as if it were a toy.

The woman in the painting is represented on Venus as the ideal of beauty. She has a vision, it is a natural landscape, it is an ideal world, a reality that accompanies her and that contrasts with her painted lips that represent artificiality against natural beauty.

Behind her floats an egg that signifies the beginning of life and in her hand she holds a tree branch, on which a butterfly perches as a bud of life.

A cloud crosses his thoughts, while geometric elements are suspended floating around it; and at the height of his arm an elongated spot in an ascending way, signifies the line of life that fades towards infinity.

It is a painting that has a reference to nature and the trilogy of sky, sea and land, towards the last stage of the day, sunset. The eyes towards infinity are the windows that are positioned in the center of the painting, they are accessibility keys to another dimension, and it divides the painting into four parts. Cascades of gray that blend in with the sea and evoke both the sky and the sea, float like a fabric. Some white ribbons cross the painting, they are the medium between the viewer and the interior of the painting.

It is a vibration of color, it is an imagination of a hand that holds a glass of champagne, this is in the upper part that is a center of reflections, a screen of lights, bubbles and shine, like a city and its clouds in heaven.
The hand is surrounded by a halo of lights, it projects an energy, similar to a diamond, but it is also a funnel that sucks and turns towards a bottom that cannot be seen. It is a hand that clings firmly, but at the same time it is supported by the water, it floats in the crystalline and blue, a water that envelops, similar to a ribbon.

A woman is lying and suspended, divided in two, a sphere in a half moon, as a protection, surrounds her head and expands its resonance in the form of shadows. She floats in the middle of nature, and is crossed by endless elements that intersect, but is protected by a resonance of spheres that have their own echo, prolonged towards the bottom, while she continues to slide along the wooden beams.

It represents a lonely road, almost unreal, as if it were a lunar scene. A porous landscape penetrates towards the transparency of a luminous violet.

The lonely road is surrounded by an image of a city-port that begins and ends the history of that road. In that port there are boats, they are still, they float in the middle of a sunset environment, an urbanized, artificial landscape.

The image hangs from a luminous screen that pushes its ocher light from the background, framed on the sides with a very luminous violet.

It is an allegory of the sea, it is the vision of a blue landscape. A sense of deep blue, in which two cylinders, also made of sky and sea, fall into the void, of a blue that blends in, they are like two parachutes that fall into the sea, as if they were descending in free fall or floating.

We can imagine the depth of the precipice, and a seashell is also falling, descending towards an even deeper precipice, where the texture is similar to a cloth, in a dark blue like a spilled ink.

Turbulence passes through the misty sky, like a spiral that creates shapes and colors.

It represents different visions united, there are lights and diffuse forms, it is a sensation of permanent movement and distance, but there is also a sensation of search for detail, of seeing the forms in magnification like a zoom.

These visions of travel at different angles that intermingle the interior and the exterior, are found from the same observed window, an arm is supported and on the outside the transience of the sky and the clouds in different points of view.

The painting has a leading front, a strong, heavy, impenetrable metal door that spreads its reflections and creates a range of colors similar to a shining sun. In the center of the door there is a hole and like an eye, it is the only link to the interior, jealously closed.

At the door of the theater, the interior is on the outside, floating, where we see what is behind, it is the way to enter the imposing door. You can see the many empty chairs that make up the theater, its lights, its preparations in the midst of fantasy, it is a theater inside and out, which keeps the information to the viewer like a showcase.

Contemplation is the main element. A young woman is in profile, her face is diffuse, but her features are beautiful, she looks towards the horizon with limits that only she knows, it is what the window imposes at dusk in a city with its artificial light. It is a horizon full of mystery with shadows and structures that stand out subtly and diffusely.

Her presence is strongly linked to a suit like armor, strong, rigid, but imposing like a samurai. Inside the room, curtains cover half the window and intersect with structures that look like antlers in the shadows.

A soft light envelops his face as if it were receiving the light of the moon; the haunting background of the window is delimited by gray lights outside the room, and the light of a candle is reflected on the floor.

Contemplation as an apparition, a mystery; the face is blurred, fogged up, like glass or distant; in a self-absorbed state.

It represents a physical state of movement and at the same time a state of rest that is observed in the shadow of a chair, behind a dress that is shaken in the midst of a rushing wave of waves, and between colored lines that generate sensations strange, where the limits do not exist and seem to disappear and generate forms.

This immensity receives reflections and underground lights. From the depths other lines emerge and rise as if they were crossing them, just like the stakes, but in reality it is a way of joining it, it is a way of feeling that physical state and the rest in the shadows, a latent threat of containment.

A woman is with her dog, but in reality she is half statue and half human and blends in with the other two statues that decorate the room. Her human arms surround his dog, the only being that really has life and is real; She poses like a statue, but she has a warm gesture on her face, something human, although her eyes are inert, her expression is one of tenderness and sadness.

Everyone takes the scene as part of it, as if they were a family, it is a vision between reality, fantasy and the apparent, like a snapshot.

It represents the shadow of a moving body, it runs with unreal flexibility due to an optical illusion, too fast for the eye. It is surrounded by directions that float with it, also upward directions on the sidewalk, up towards the upper part of the body, float and follow it like lights, indicating different directions in a luminous, electric blue, like neon lights that accompanying the escape and which are the clues to the movements that the shadow gives. Under his leg, waves that reverberate downward, float, are waves that deepen the leg’s state of gravity, those few seconds when it remains immobile and in levitation.

A luminous cloud, gray like vapor, rises in the upper right corner of the frame, as if it were a fuel that drives movement. It is a light that gives the energy from behind, the impulse that makes the body fly.