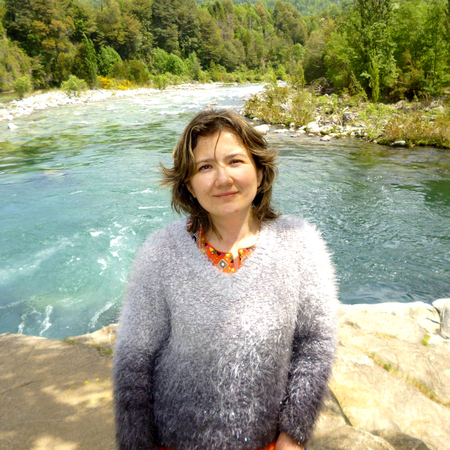 Beatriz Poblete was born in Santiago de Chile, she is a painter based in Brittany, France. She studied Audiovisual Communication at the Complutense University of Madrid (2006).

Having been born in a family of artists, her father taught her to paint, and since the age of fourteen she produces painting in oil on canvas. She has lived in Madrid, Barcelona, ​​Florence, and before in the Araucanía Region, close to Chilean Patagonia. During her stay there she also made a series of watercolors based on nature and birds.

Highly influenced by her film studies, her painting is expressed in planes that intersect and overlap, as in film montage. Through the colors she impregnates the viewer with an atmosphere and sensations, discovering the different elements of the painting. The reading is done separately and then their interaction with each other seems to come to life as if the blueprints for a movie were being developed. The orchestration of these elements allows the viewer to capture the deep symbolism of the scene in the overall composition of the painting. In its imaginary texture, the figurative and the abstract coexist in a fantasy of permanent restructuring of the different planes of the stage, giving opportunity to different ranges of understanding.